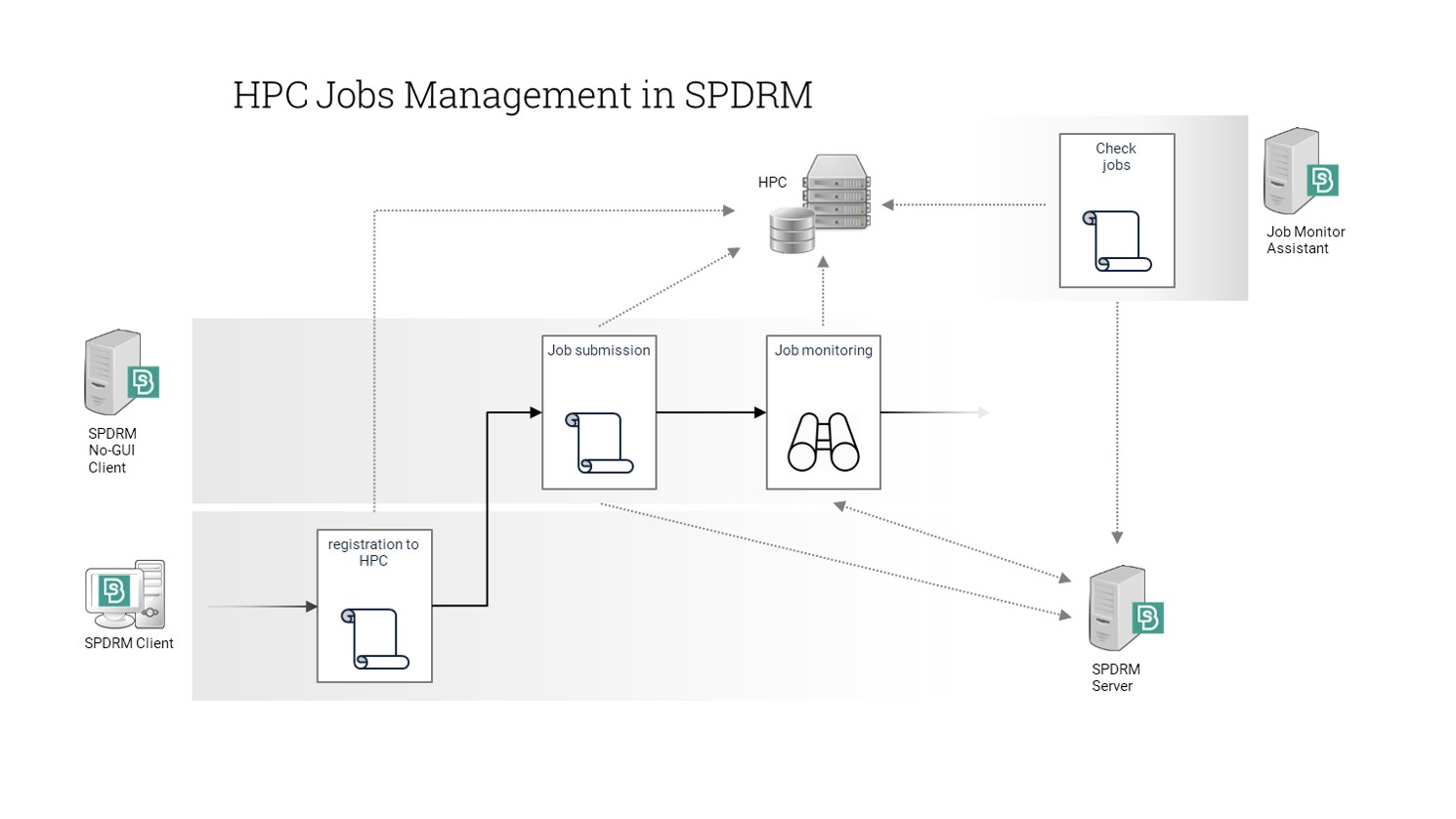 This version delivers a number of enhancements and fixes to the users of the most advanced Simulation Process Data and Resources Management software.

The most important enhancements and fixes are listed below.

A new interface is introduced to streamline the submission and monitoring of HPC jobs. With the new functionality, clients are getting notified automatically for job status changes of interest directly through the SPDRM server, minimizing the network traffic with the HPC server and eliminating the need for keeping the SPDRM client open while the job is running.

Scheduled execution of processes or SPDRM scripts is now possible through the new "Scheduled Jobs" utility. Job recursion can also be requested, facilitating the execution of tasks like for instance, the download and translation of CAD updates.

The RIOC (Remote Input-Output Commands) external service (i.e. remote lightweight HTTPS server) is introduced to handle file I/O commands on SPDRM Vault Replication (i.e. single-server multi-site) solution, related to remote requests made by the SPDRM Client, or ANSA/META applications. The objective of this development is to bypass all SSH connections used in previous versions of SPDRM multi-site solution, by calling a REST command on the remote HTTPS server, which will perform (locally) all actions called from the SPDRM Server. This new feature makes the SPDRM single-server multi-site solution more robust, secure and efficient.

A new REST API is introduced, to facilitate the extraction of SPDRM information through 3rd party applications. In this first version, DM Schema, data object and process related information can be extracted.

New, redesigned icons are used for all data objects, compatible with version 21 of the BETA Suite. Especially for Parts, Groups, Subsystems and Subsystem Groups, the new icons reflect different sub-types and states of objects (e.g. Parts and Subsystems with connections, with or without attached file, etc.).

Drag and drop can be used on data objects (DM items, RLIs or simple files) from the SPDRM Client to the filesystem or to any running ANSA/META session in order to export their files or open them in the pre-/post-processor respectively (supported from BETA Suite v20 and later).

A quick search for data objects by their handle ID is now supported in the Data Manager, through the new query option "Handle ID" available under the Search button.

Every time a new version of a compound entity (e.g. Simulation Model, Loadcase, Simulation Run) is created through the SPDRM client, the contents of the base version are automatically inherited by the new entity.

Types of data object relationships have been rationalized and are now organized in three new categories: "Lifecycle" relationships, "where used" relationships and "other". This update affected the legend of the Lifecycle Graph and the References View.

In the Lifecycle Graph, the process of updating references between data objects has been improved.

When attachments of type "Linked Directory" are deleted from the Data Tree (e.g. the folder with the solver results that is linked under a Simulation Run), it is now possible to trigger the deletion of the physical folder on the filesystem –if applicable.

A new node type is introduced, called "Observer" node, which is used for the monitoring of jobs submitted to the HPC.

Considerable efficiency improvement can be achieved during the execution of ANSA-intensive processes (i.e. processes consisting of several consecutive ANSA nodes), with the new functionality that enables the reusability of idle ANSA sessions from different process nodes. With the new functionality, the ANSA session launched by the first ANSA node of the process can be reused by all subsequent ANSA nodes, eliminating overhead related to the application launch (supported from BETA Suite v21.0.0 and later).

New script functions have been supported that enable the creation of a workflow by combining existing process templates, connecting the right output-input slots.

Finally, an input slot can be now marked as "optional", indicating that the node can become ready for execution regardless of whether it got a value or not.

The process template comparison functionality has been enhanced and now supports the indication of differences identified in the node scripts in a "text diff"-like manner.

Edit of a multi-selection of DM items is now possible, facilitating the use-cases where several files must be sent to the same session of an application (e.g. in case of ANSA, for file merge or for opening each file in a different model.

An Edit to ANSA or META can now reuse a running session, eliminating any possible overhead during the application launch (supported from BETA Suite v19.1.0 and later).

The new built-in variable _handleIds is introduced, that can be used as a command line option and is translated to a string of comma-separated handle ids of all the selected data objects. This new feature is particularly useful in cases where the editing application can make direct use of the handle ids of SPDRM objects (e.g. ANSA and META can directly get access to the data objects by server id, through the script API).

Several new functions were added in the scripting API in order to:

Additionally, a new optional argument was added to search-related DM functions, in order to enable the search of deleted data objects.

A new, effective alternative is supported for all those cases where the process designer would have to create a process consisting of a single ANSA/META node and call it through a Script Action in order to process some data objects (e.g. for viewing key results in the DM Browser): ANSA and META-specific Script Actions are now supported, which will pass to the respective applications a script from the SPDRM Library and will execute a pre-defined function (supported from BETA Suite v19.1.0 and later).

Attempting to overwrite a script file that is associated with a Script Action, a warning message pops-up to notify the user.

To facilitate testing and data clean-up operations, administrators can now deactivate Validation Script Actions temporarily. The deactivation is effective only for the specific user and the current user session.

SPDRM Issues can now be created on DM objects directly through ANSA and META, through the DM Browser (supported from BETA Suite v20.0.1 and later).

The Issue Management configuration file can be updated without the need for SPDRM server restart.

The list of SPDRM Issues can now be exported to a file (supported file formats: CSV, JSON).

In the Issue Management workspace, tooltips can be optionally displayed on issue attributes and on action button, to provide more information and assistance to the user.

In the edit card of an issue, a context menu with data object actions is available for all objects listed in the References table.

The issue identifier (Business Id) and the issue DM Item can now be added as columns in the issues list, and they can be used for filtering the listed items.

For the easy identification of data objects that are associated with SPDRM issues, the new column "Issues" can be added in all data object lists.

The issues of a data object can be easily identified through the context menu option Views > Issues.

It is now possible to configure the layout of the automatic email notification that will be sent upon the creation of an SPDRM issue.

It is now possible to visualize the issue workflow (supported status transitions), as this is described in the configuration.

From now on, access to the SPDRM Web Services page requires authentication and only users that belong to "Administrators" group are considered as authorized users.

Considerable performance improvement will be experienced when saving through ANSA Subsystems with very big hierarchy.

The audit mechanism for multi-site environments has been enhanced in order to also monitor the disk usage on remote vaults.

It is possible to select the site of execution for a node of the process.

A new mechanism is introduced for data purging on remote (replicated) vaults that serve as file caching servers on remote sites.

The script action would fail to be imported if the name of the vault that hosts the associated file on the "source" SPDRM environment, does not match with the vault name of the "target" environment.

The system would fail to launch the appropriate mimetype application if the "Remember Selection" checkbox had been enabled previously in the Mimetype selector.

ANSA would fail to connect to the SPDRM server, due to parsing error when the data model contains non UTF-8 characters.

The save of a Subsystem through ANSA could fail if its hierarchy contained a big number of Parts and Groups (i.e. > 50.000 hierarchy contents).

The server software of SPDRM is currently available on Linux and MS Windows 64bits.

The client software of SPDRM is running under 64bit flavours of Linux and MS Windows.

For details, refer to the System Requirements document.

Customers who are served directly by BETA CAE Systems, or its subsidiaries, may download the new software and documentation from their account on our server. They can access their account through the "sign in" link at our web site.
Contact us if you miss your account details. The Downloads menu items give you access to the public downloads.
Customers who are served by a local business agent should contact the local support channel for software distribution details.

All files required for the installation of this version reside in the folder named: "SPDRM_v1.4.0" and are dated as of July 31, 2020.

These files should replace any pre-releases or other files downloaded prior to that date.

The distribution of this version of SPDRM is packaged in one, single, unified installation file that invokes the respective installer and guides the procedure for the installation of the required components (i.e. SPDRM server and client).

For the installation of the software on each platform type, download from the respective folders, the .tar.gz file for Linux or the .zip file for Windows.