BETA CAE Systems announces the release of
the v20.1.3 of its software suite 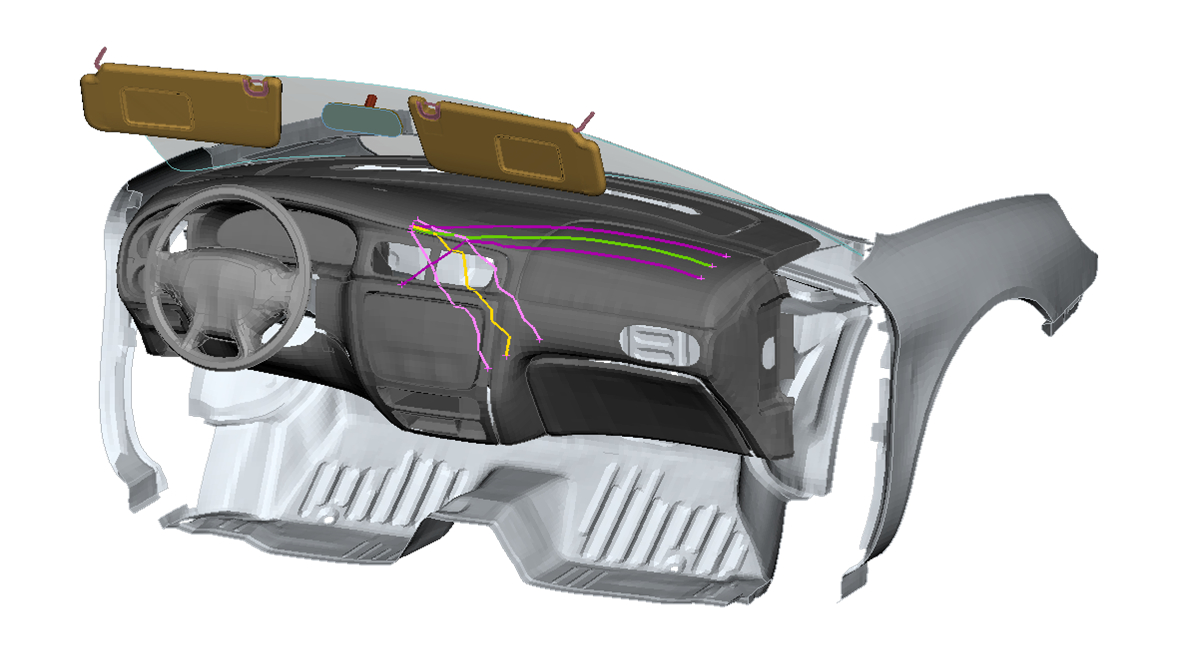 Apart from fixes in the detected issues, this version also hosts noteworthy enhancements and implementations.

The new library of CoreTechnologie (CT 2020 SP1 HF) is now available, supporting the formats of NX1899 (UGOpen) and Inventor 2020, in addition to the already existing ones.

The Assembly and specifically the Assembly Sets from now on directly reference the Loadcase as connectivity, instead of a list of the contained Subsystems/Library Items.

In the area of Loadcases/Assembly, unloading modules (Subsystem or Library Item) with defined A_POINTs/LC_POINTs is no longer an issue for the proper and automatic re-attachment of all affected entities when the container is loaded back.

Moreover, Loadcases and/or Simulation Runs can contain all the Loadcase Assistant related entities in the definition file during "Save in DM", backed up by dedicated ANSA.defaults settings.

Focusing on CFD mesh, the quality of anisotropic mixed/quad type mesh has been significantly enhanced.

Loadcases/Assembly: Reloading a module (Subsystem or Library Item) attached to Connectors, Boundary Conditions, or other entities via its A_POINTs/LC_POINTs, could erroneously mark the Model Container of those affected entities as modified.

Subsystems: From now on, any id adaptation applied to a loaded base module (Subsystem or Library Item) will be removed automatically on "Save in DM" of the base module as an ANSA or solver keyword file. In this way, the file of the base module will contain ids in the source, un-adapted range.

Unexpected termination could occur when the Conv2Poly function was used on Light Volume representation elements.

NASTRAN Header would not be correctly read, in case it contained an empty Set.

Furthermore, unexpected termination would occur while reading a NASTRAN file containing two Sets with the same id, one of which was a part of a Superelement.

ANSA would not exit properly, if NVH-Console was running.

Calculation of System Modes based on FAST SOL103 (by using the modal basis of each component) with EPILYSIS most of the times resulted in errors.

Unexpected termination would occur, when Geometry Similarity was enabled in the Settings and Cross Section’s Multicut function was used.

When loading a .metadb file via drag and drop while a geometry file is already read in META, a menu pops up to handle the .metadb file.

Unexpected termination could occur upon reading a new model, if the Render functionality was enabled in multiple windows.

The reading of results from column ASCII files was distorted in versions 20.0.4 and 20.1.2.

Unexpected termination could occur while reading results from more than one lossy .metadb file.

META could terminate unexpectedly while reading some layer results of Theseus –FE, as well as while reading part hierarchy of a specific model through HyperMesh comments.

Differences in HDF format written by NASTRAN v2020 compared to v2020 ALPHA caused an unexpected termination when trying to read the file.

Moreover, focusing on Modal Parameter Estimation, since v20.0.0 curves were not created when the option to plot curves was selected, without the option to output to .unv file at the end of the analysis. The problem appeared only when applying the function from GUI, whereas it was applied correctly when using the respective command.

Support for Mac OS has been discontinued.

Support for 32-bit platform has been discontinued for all operating systems.

All files required for the installation of this version reside in the folders named "BETA_CAE_Systems_v20.1.3" and are dated as of August 5, 2020. These files should replace any pre-releases or other files downloaded prior to that date.
The distribution of this version of our pre- and post-processing suite is packaged in one, single, unified installation file, that invokes the respective installer and guides the procedure for the installation of the required components.

For the installation of the software on each platform type, download from the respective folders, the .sh file for Linux or the .msi file for Windows.

In addition to the above, optionally, the META Viewer is available to be downloaded for each supported platform.

The Abaqus libraries required for the post-processing of Abaqus .odb files are included in the installation package and can be optionally unpacked.